Classic SUVs don’t receive nearly the market respect that similarly aged muscle cars receive, but that may be about to change. SUVs, and their younger brother – the crossover – have been a part of American culture for the last 50+ years. Like classic muscle, a generation of kids grew up riding in back of these vehicles, and now those kids have the cash to properly restore their nostalgic rides. Thinking of investing, or just looking for classic cool? Take a look at the 14 classic SUVs you should be considering. 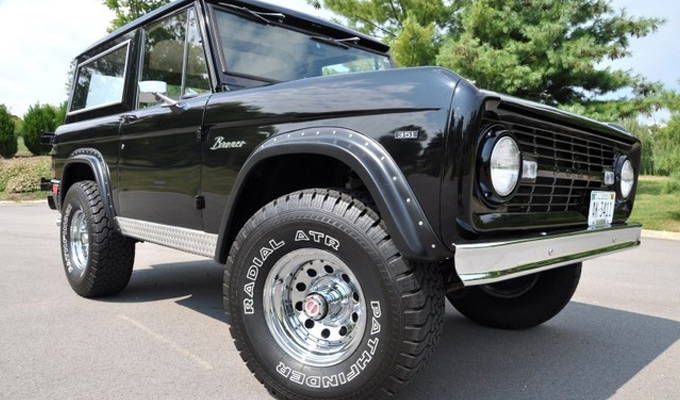 Of course, the Bronco leaps to everyone’s mind when talking about tough, old, capable SUVs. Five generations spanned 1966 to 1996, with the first generation ’66 to ’77 model being the most desirable. The truck has classic lines, and an emphasis on economy and affordability makes it simple and affordable to repair. Engines ranged from a choice of straight sixes to V8s, with the best option being the 302 V8. Really any year V8 Bronco makes a great off-roader, or a good escape vehicle that can outrun the entire LA police force. 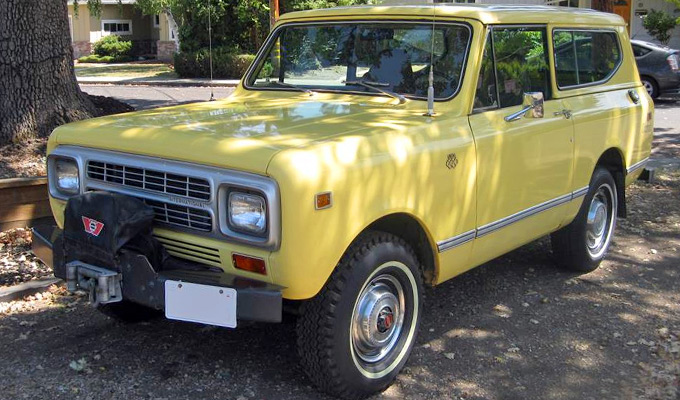 The Scout and second generation Scout II were assembled from 1961 to 1980. Despite the name, the model changes were mostly minor, except for changes in drivetrain. The Scout offered a wide range of under-powered four cylinders, capable inline sixes, and torquey V8s. Interestingly, AMC gas and Nissan diesel engines found their way under the IH hood, with AMC being the top choice for off-roading due to parts availability. The Scout is already a cult favorite, so put this one in the top half of pricing on this list. It’s probably worth it though, just for the classic lines. 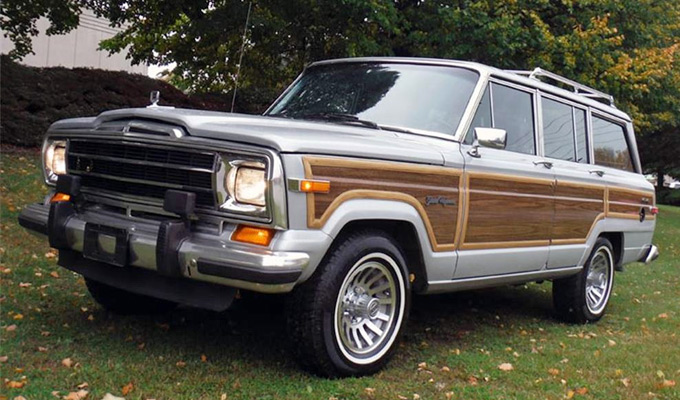 From 1963 to 1991, Jeep made this large and capable off-roader. The Wagoneer looks like nothing else on this list, making it instantly identifiable, and a faux wood paneled piece of Americana. Over the decades, power varied from Willys, to AMC, to Chrysler, with even GM transmissions. Despite the Frankenstein approach, the later years offered more refinement, and reliability, and are generally more desirable. Keep that in mind when looking at a project, as a late model may cost you more, but will sell for more cash. 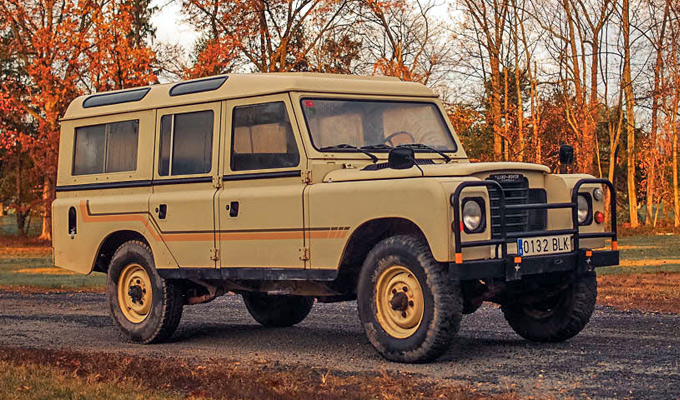 The Series vehicles from Land Rover were three generations of the same durable vehicle that made a reputable name for the British company. Picture a LR traversing wild African vistas. Yup, the one you’re thinking of is the boxy LR Series. The III is the ideal, as the others are antique and need to be in a museum. The 1970’s era III offers all the capability and dependability, with the great classic styling, but also gained safety and convenience features. You should get a Series III just because those stupid center gauges were finally moved over in front of the driver. 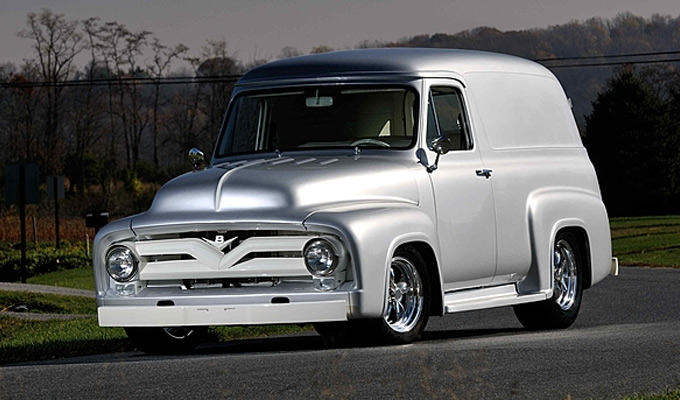 This old guy is arguably what started it all. The F-Series panel was basically a pickup truck with a windowless van-like cover dropped on the bed. Despite its half-assed approach, companies and tradesmen ate them up, and the SUV was born. It’s a first generation F-Series underneath, so you’d think parts would be easy to find, but this truck is approaching 70. Inline six and flathead V8 engine options both made about 100 hp, so this is more of a show truck or cruiser than an off-road brawler. 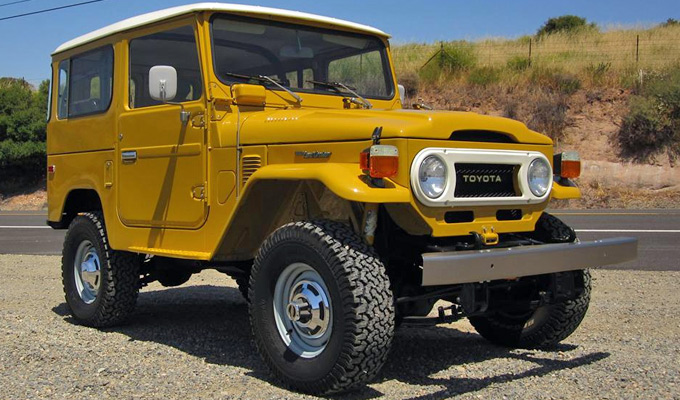 Toyota made this larger alternative to the Jeep CJ from 1960 to 1984 (and 2001 in Brazil), making it one of the longest lived truck platforms made. Earlier Cruisers were basically military vehicles, so they were bare bones units that were driven into the ground. Rarity has made them collectible, but a J40 offers real world road use and decent parts availability, while still being a collector’s item. While loyal owners keep the asking prices high, know that this is one of the best foreign trucks to build or modify. Due to an insanely long production run, you can easily add EFI, a 5-speed, or power steering on the cheap. 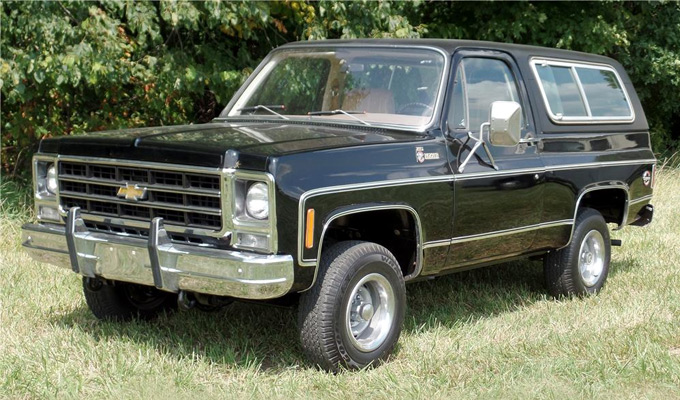 GM, typically late to the game in their bureaucratic way, dropped a bomb on the SUV market with the Blazer. While the Bronco and Scout were competing with the small Jeep CJ, Chevy took the easy route by using their full-size truck chassis and bodywork, and adding a very short bed. This made the Blazer cheaper to produce than the competition, while offering full-size truck luxuries like air conditioning, auto transmissions, and interior space. Sometimes the simple answers are the best. The 350 is the best route here, but even the I6 engines have enough torque for some trails. 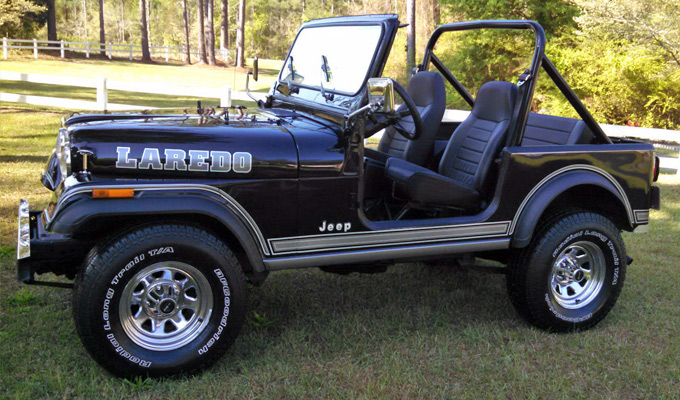 The CJ-7 is well past the Willys military GP, but also pre-Wrangler. This generation had all the charisma and good looks you know today, but was produced from 1976 to 1986. Not exactly the pinnacle of American automotive production, however the Jeep’s reputation was largely unscathed due to its simplicity and focused design. While many vehicles lost their way in the mid ‘70s, the CJ was still light, with short overhangs and serious dirt cred. The engine choices varied widely, from AMC V8s to GM’s Iron Duke four cylinder. Don’t get that one. 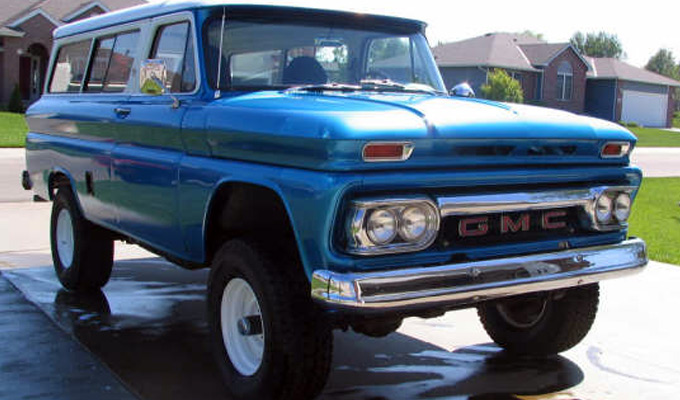 The 1960 Suburban was Chevy’s sixth generation of the SUV. Or maybe it was the first gen. The first five were a weird tall car looking thing. The 1960 took styling cues from Chevy cars, and that actually looks better than it sounds. Power was decent, with a range of I6 and small block Chevy V8 options. Although it was no muscle car, the 305 was torquey enough, and the Powerglide transmission is probably still in service today without an overhaul. 1960 was also the first year for 4WD. Appalling gas mileage, but who cares? Look at it! 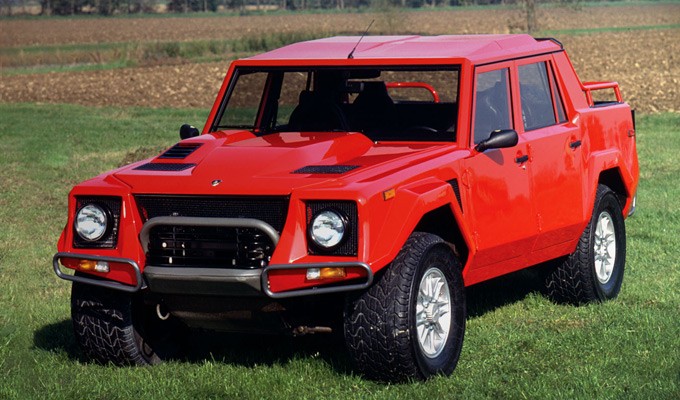 The 1980s, Lamborghini, and cocaine go hand in hand, so the LM002 should have been no surprise. Even by the LM002’s debut in ’86, the company was world famous for crazy supercars like the Countach. Dubbed the “Rambo-Lambo”, it looked like the love child of a Countach and Humvee, with the V12 engine of the former and the ground clearance of the latter. It was the luxury SUV well before Porsche, Cadillac, Jaguar and Bentley got into the game. It’s also super rare, with a little over 300 produced. Tell your friend with the commoner’s Gallardo to eat it. 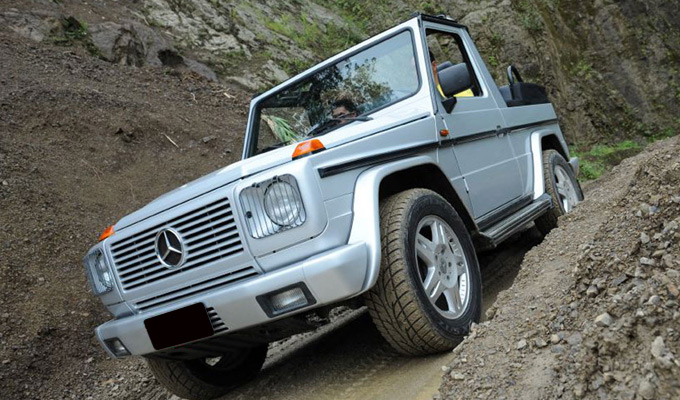 The Mercedes Gandalf… the Gannondorf… anyway, the G-Class is a mil-spec troop carrier rated for civilians with a taste for luxury. The G-ride goes back to 1979, but those ones aren’t so great. Things got interesting with the 1990 update (hey, technically a classic at 25), with the lines more familiar to the current version, and the luxury knob at the factory turned all the way up. A twin turbo 6.0L V12 could be had under the hood, although any of the powerplants were above average in quality and performance. 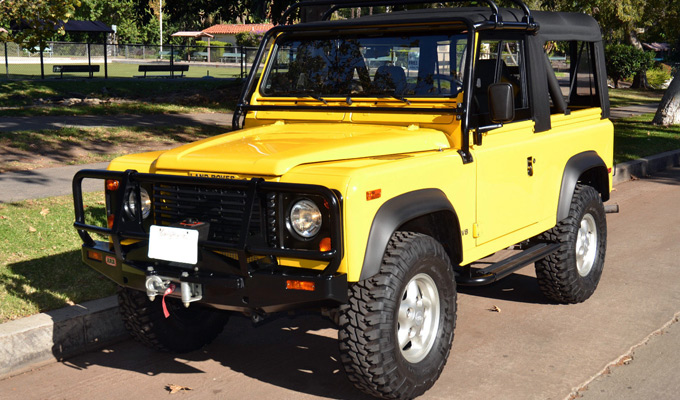 It’s the SUV that depreciation forgot. Depreciation LOVES luxury manufacturers, and British manufacturers. So when a British manufacturer makes luxury SUVs, you would figure after a couple of years they might be 90% off. The Defender would prove you dead wrong. The Defender replaced the old Series models with classic sheet metal, but an improved ride, capabilities, and interior. US models had the buttery smooth 3.9L V8, and a choice of transmissions. Prices were high 20 years ago, but have only marginally fallen. Head to eBay Motors and weep at a well-used 30 year old SUV that costs over 20 grand. 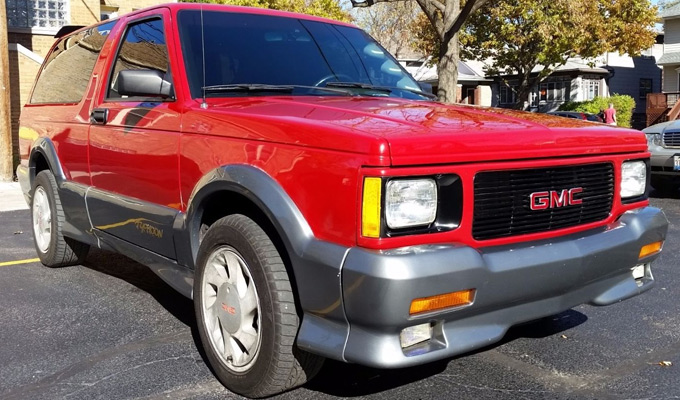 Technically, not a classic yet. Still, you should buy one of these now, or kick yourself in a few years when you see what they’re going for on Barrett-Jackson. The Typhoon is the SUV version of the Syclone pickup, and are essentially the same truck. Take a compact early ‘90s boxy truck with a terrible interior, stuff the big 4.3L V6 under the hood with a turbo, have it drive all four tires at once, and watch how a legend is made. The Sy/Ty trucks have been a cult favorite since launch, and prices will only go up. 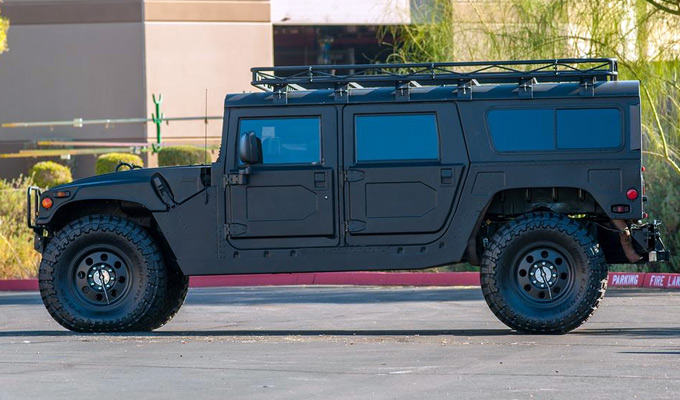 The definition of ‘90s macho, and also one of our picks for vehicles that will survive doomsday, the AM General/Hummer H1 is the military Humvee for civilians that want cool expensive hardware without the commitment. Take the military vehicle, paint it friendly colors and you have a California Governor’s ride of choice. Any version from the ‘80s on has all the tough looks and ground clearance you could ever want, but the most in-demand are the 2006 final year. With a 6.6L Duramax making 300 hp and 525 lb/ft, and numerous enhancements to drivability and reliability, the H1 became almost as decent on-road as off.

From mega lux to bare bones adventure, these are the best 14 classic SUVs that should be on your shopping list. Have any experience with one? Let us know which one you think is the best classic SUV in the comments below.

The Alfa Romeo Spider Is ...