Corvette C8 Review – Not the Vette You Know

There are 68 years of history behind the Corvette trademark. Literally seven decades of pure American muscle, packed into a low-sitting, streamlined design. The Corvette not only stood the test of time but stoically pushed forward with every generation.

The new Corvette C8 brings a change not seen in the last three quarters of a century from Chevrolet’s two-seater sports car. For the first time in its history, the engine is shifted rearward from its front position to become the first mid-engine sports car of its kind.

Still, there is no way on Earth all the fuss revolves around the engine movement. So, let’s start from the outside and have a look at what else Chevrolet changed when delivering the C8.

One would expect that, with so many changes on the horizon, Chevrolet would take it slow and push them over a few generations, or at least between facelifts. But no. The Chevrolet C8 is the first of its kind to feature a folding roof, on both the coupe and the convertible.

Basically, even if you go for the coupe, the roof isn’t fixed on the chassis, so you can still manually remove it and pack it in the rear. The convertible version does the job for you, electrically, with the added benefit of not occupying rear space.

The cabin is shifted forward compared to the previous generation Vette. As a result, weight distribution has been improved. Driving dynamics also received a boost thanks to the layout shift. Chevrolet proudly states that the strength lays in the floor structure, and thus a fixed roof version “is not required”.

And while most supercar manufacturers have the budget luxury to throw as much carbon fiber into their builds as they like, Chevrolet had a budget to stick to. With a MSRP of just below $60.000, the Corvette C8 features a lightweight and cheaper aluminum frame. Despite the lack of carbon, the C8 boasts a 19% increase in body stiffness compared to its previous iteration, the C7. 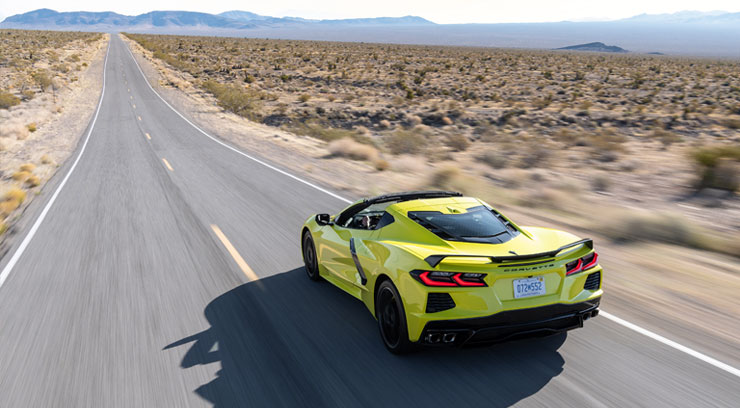 Unlike the previous 60 years of Corvette, we move to the rear of this latest model in order to unveil the engine. On the coupe, the engine is beautifully displayed under glass.  You have to remind yourself that you’re not looking at a Ferrari.  Either double tap the key fob button or press the switch beneath the logo on the rear and the hood slightly pops up. Lift it all the way and witness the 6.2 liter V8 boldly sitting beneath the carbon fiber pillars.

The base engine is good for 475bhp and 465lb-ft of torque. For a bit more power, buyers may choose the Z51 package which brings along a performance exhaust and an extra 5 horsepower as well as 5lb-ft on the torque curve. Besides, the Z51 package beefs up the brakes for more stopping power, stiffens the suspension and also employs high-performance summer tires in place of the standard all-seasons.

The looks of the Corvette C8 don’t impress only on the outside – the interior is just as refined. Compared to the C7, the new Corvette brings a massive switch in terms of material quality. Three seat types are available: GT1, GT2 and Competition. Each seat is lighter and thinner than the previous one, while also boosting lateral support.

Overall, the cabin ditched the resin smell and cheap plastic finishing we were used to seeing on the previous generations. Have it this way: on the inside of the C8 Vette, if it isn’t glass, it’s either alcantara, leather or polished carbon fiber.

The down-pouring line of buttons on the center console will at first seem really difficult to use. Despite this, they take little time to get used to them and to properly appreciate their proximity. As GM designer Tristan Murphy states, the button layout was decided after months of debate. GM drawn inspiration from million-dollar supercars such as LaFerrari and Porsche 918. The result? A long streak of buttons hinting to what it may feel like a fighter jet cockpit.

Keeping the spirit of a sportscar, the Corvette C8 doesn’t really provide a whole lot of space for storage. Door pockets are tiny, cupholders follow suit. There is also little to no actual visibility through the rear window. To fix the issue, Chevrolet fitted a digital rearview mirror connected to a camera peeking over the engine bay. 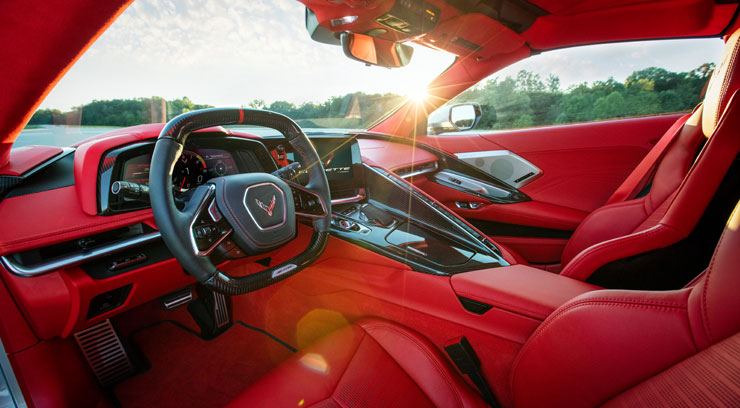 Time to blast the throttle!

Since all worthy mid-engine rivals of the Corvette C8 feature at least one turbocharger, the naturally aspirated V8 is in a league of its own. Put a few miles in and the wide torque curve  will make you learn just how flexible the aspirated V8 actually is. There is a kick right off the lower RPM band and it keeps going until the red-zone if you want it. Since there’s no turbo, you don’t get any lag.

Here’s the kicker: even when rambling on country roads, there is no need to mash the throttle to the floor. Even within the mid-range RPMs, Vette’s V8 roars metallically through the chrome piping of the exhaust. Even when switching to Tour Mode with its cylinder deactivation feature, the engine sound remains mostly unchanged.

It’s all fun and comfortable. However, chances are, you are not getting a Vette to cruise below the speed limit all day long. Feeling like stomping on the throttle and keeping it stuck to the floor? Once you do it while in Track Mode, the C8 will turn exhaust notes into something that could shatter windows of corner stores. With power delivery linearity not even the best tuned turbo engine can deliver, the C8 spins the wheels hard and mercilessly tackles corners. Still, you can feel that the big V8 block can do more than 475hp.

So, where’s the rest of the power hidden?

In a world where even supercar makers caught the downsizing train, Chevrolet took the less beaten path. The automaker has pulled out the C8.R GTLM 5.5-liter V8 engine from its endurance car and converted it for road use. It is the equivalent of a road legal track weapon.

The result? The Chevrolet Corvette Z06 now features the world’s biggest flat plan crankshaft V8. At 4,800 it directs 670hp to the wheels, making it also the most powerful naturally aspirated V8 in a production car.

Of course, the Z06 is more than just an insane engine. To be able to cope with the amounts of power, Chevrolet engineers had to also improve the transaxle and chassis of the Z06 over the C8, while also adding aerodynamic improvements to keep the car on the road.

With the adoration of the mid-engine C8 Stingray, the Z06 had to be special in every way in order to not dwindle in the shadow of its little sister. And it delivered, far and wide. The Chevrolet Z06 has the exhaust notes of a Ferrari, jumps the start like an Aventador and responds like a Porsche. 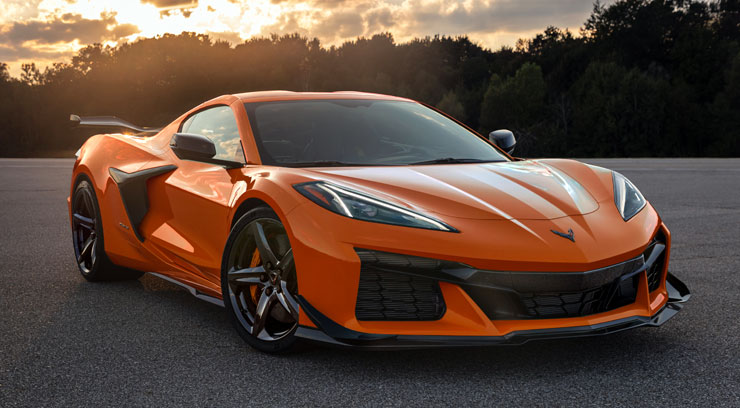 With the new C8, Chevrolet decided to put together a package that most automakers would have deployed over a few generations. Fortunately, the gamble paid off and the first mid-engine Vette in history ticks all the boxes for style, performance and price.

With the same sharky front end, up-scaled interior and powerful naturally aspirated power unit, the C8 delivers supercar aesthetics and performance without a supercar price tag. While the Z06 is the king in terms of performance, the Chevrolet Corvette C8 does a great job in bringing all the good parts of Corvette history while heavily polishing the less brilliant ones.

Out of this World Citroen ...

Zenvo ST1 Fire On The Track!