Hyundai isn’t exactly known for its pickup truck lineup, because, well, it lacks an actual pickup – until now. Based on the Hyundai Tucson crossover, the 2023 Hyundai Santa Cruz brings a fresh take on the idea of a pickup.

Unlike big, established models such as the Ford F-150 or RAM 1500, the 2023 Santa Cruz aims for a more unique styling and a different objective altogether: a pickup truck for those who like sedans and SUVs. Let’s have a look at how Hyundai manages to achieve this.

Hyundai isn’t actually calling the Santa Cruz a “truck”. Instead, they are going for the Sports Adventure Vehicle (SAV) classification. While the marketing term is questionable, it does impose the idea that the Korean automaker isn’t targeting traditional truck owners with this model.

Unlike most traditional trucks that come with a body-on-frame, the Santa Cruz features a uni-body design, given its relation with the Tucson crossover. The Santa Cruz nameplate is proudly stamped all across the width of the tailgate, making sure people know this is the first Hyundai to actually come with a truck bed.

To get the tailgate open, either press the little button in the middle of the tailgate, beneath the Hyundai logo, or you can pick up the key fob and press on the lower right button describing a pickup truck with its tailgate down. Still, you don’t quite have access to the full bed, given the cover on top. Pull on the Hyundai branded latch in the middle of the cover and start sliding backwards to finally reveal the truck bed.

The bed cover is impermeable and tough, and also benefits from a locking mechanism, thus keeping your possessions dry and away from hands of opportunistic thieves. For more space, there is a small trunk cleverly hidden beneath the bed floor. The sides of the truck bed in the 2023 Hyundai Santa Cruz also come with various pockets for storage, as well as a power outlet ready to provide current to various tools.

It’s debatable, however, if the 4ft long bed can be compensated by all the quirks and features of the Santa Cruz. Limited bed size isn’t a considerable problem for most pickup trucks. Then again, the Santa Cruz doesn’t target the same market segment that would buy an extended bed Ford F-150. You’re not going to see truck nuts dangling from the rear bumper or giant patriotic flags posted in the bed of a Hyundai pickup. 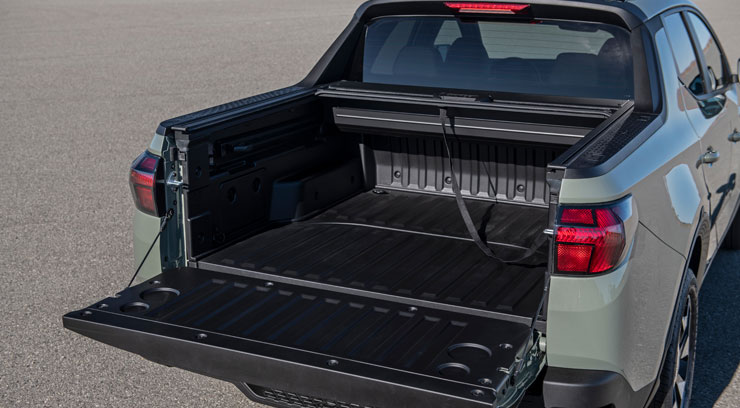 In terms of exterior styling, the first thing that pops out is the addition of triangles – a lot of them! The entire bed floor as well as the rear bumper, part of the wheel arches, bed rails and elements in the front are ornated with triangles with one side-view image of the Santa Cruz in the middle.

Overall, the styling of the Santa Cruz defies everything else that is on the road right now. It prompts “double takes” as it takes more than one glance to figure out what they’re looking at rolling down the street. The biggest competitor of the Santa Cruz is clearly Ford’s smallest pickup, the Maverick. However, Ford went for a very traditional truck-like design, while Hyundai took the less beaten road.

If there is one part of the Santa Cruz that doesn’t look that unusual or distinctive, it is definitely the front end. Yes, it may look different for a pickup, but the front fascia heavily resembles the Hyundai Tucson. First, the Tucson-specific daylight running lights (DRLs) have been carried over to the Santa Cruz, as well as the slightly differently styled headlights mounted lower than the DRLs.

At 195-inches long, the Santa Cruz is just about as long as a mid-sized sedan. Petite by truck standards, the reduced size of the Santa Cruz promises better maneuverability in crowded city streets and less trouble with parking.

Hyundai may call it an adventure vehicle, but there are some obvious limits to how adventurous you can be in the Santa Cruz. The 17.5-degree approach angle and 23.2-degree departure angle aren’t exactly top-of-the-line when it comes to overcoming obstacles on trail roads or rumbling over boulders. The standard all-season 20-inch tires aren’t aiding a lot in terms of grip either. Regardless, bigger and chunkier tires, plus a lift kit would highly improve the off-roading abilities of this vehicle.

There isn’t much sculpting on the outside of the Santa Cruz to talk about. The side doors and panels are kept tidy, all while moving away from a box-shape as present in most pickups. Instead, seen from the side, the Santa Cruz looks rounded and gives an overall compact vibe.

Truth be told, the interior of the 2023 Santa Cruz doesn’t look bad, it’s just not as attention grabbing as the distinctive exterior silhouette. For all intents and purposes, the layout of the console, seats and door faces make the Santa Cruz interior heavily resemble your average crossover.

The crossover-classic interior is not necessarily a low point for the Santa Cruz. In fact, most Hyundai crossovers and SUVs have grown to the point where they have well laid out, handsome interiors, packed with tech and decent materials.

Speaking of technology, all Santa Cruz models come standard with Apple CarPlay and Android Auto, both accessible via the small 8-inch touchscreen display with BlueLink Infotainment system. A bigger 10.3-inch screen is available with the Limited trim.

To get the most out of the tech Hyundai has to offer, it is recommended to choose the SEL trim or higher, with the Limited trim providing heated and ventilated front seats, forward-collision braking, lane keeping and lane following assist, blind spot monitoring and Highway Drive Assist. As we’ve seen with most recent crossovers, the blind spot assist feature changes the gauges on the left or on the right into a display of the blind spot monitoring camera.

While the front seats are dressed nicely and can comfortable accommodate taller occupants, there is little space in the back seats and might be best served for kids, pets or amputees.

The standard 2023 Hyundai Santa Cruz comes with a 2.5-liter 4-cylinder good for 191hp and 181lb-ft of torque. Numbers that aren’t particularly impressive and testing the Hyundai Tucson in the same configuration also didn’t provide any impressive acceleration or responsiveness results. However, the upgraded 2.5-liter turbo engine, available with the SEL trim and up, provides the much-needed power boost to 281hp and 311lb-ft of torque needed by a vehicle this size. Power is delivered to the wheels via an 8-speed automatic dual-clutch gearbox.

The towing capability of the turbocharged, all-wheel drive model is set at 5,000lbs with a hauling capacity of 1,600lbs. When towing a 3,500lbs trailer, the Santa Cruz did not seem to have any issues, maybe except some slight trailer sway.

The economy rating of the 2023 Hyundai Santa Cruz is set at 19/27/22mpg (city/highway/combined), and real-life testing shows that the Sports Adventure Vehicle does manage to fit into those numbers, even when pressing the throttle a bit harder than necessary. 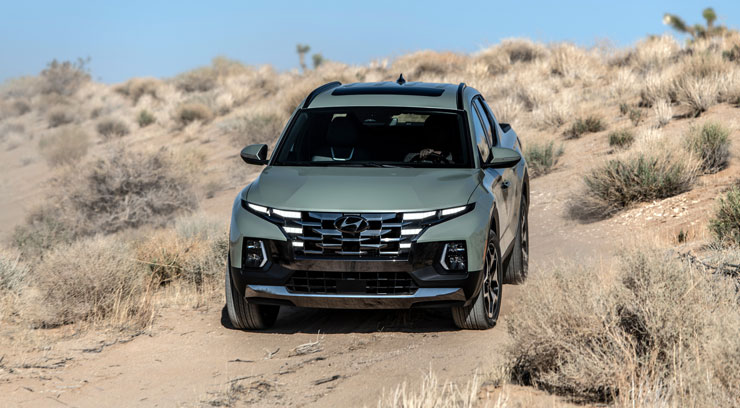 Yes, the Ford Maverick may be less expensive and offer the clichéd boxier truck aesthetics. Still, the 2023 Hyundai Santa Cruz comes with an easily recognizable and admirable body. It may not be able to haul a lot of cargo given its reduced truck bed, but it sneaks easily through tight areas where mammoths like the Ford F-Series might have to elbow their way in.

The turbocharged 2.5-liter unit coupled with the all-wheel drive capability is the way to go when choosing the drivetrain, offering almost the entire ability of a regular pickup truck for people who don’t usually need that much.