After almost two decades in the business, there is no denying it anymore: Tesla has dramatically shifted the way we see EVs and became a catalyst for change in the automotive sector. Thanks to Elon Musk and his company, most automakers have joined the electrification wave. Each major automaker now offers a number of hybrid and plug-in hybrid options in their lineup, as well as at least one fully electric model.

Tesla is currently offering four models in its lineup: the luxury sports sedan Model S, the cheaper Model 3, the Model X SUV and Model Y crossover. Each model comes to satisfy a section of the market, but opinions about the electric giant’s models are split. While some may venerate Tesla as the ultimate electric vehicle maker, others despise it for various construction issues or shady marketing practices.

First of all, let’s have a look at the downsides of owning a Tesla.

With the latest increase in prices across the line, the least expensive Tesla you can buy still costs a hefty $46,990. This will get you a basic Model 3 with only rear-wheel drive and no options. On the other hand, the most expensive car in the lineup, the tri-motor Model X can go up to $138,990, surpassing even the luxury Model S tri-motor ($135,990).

By all accounts and figures, Tesla cars don’t come cheap, especially when compared to the MSRPs of other electric vehicles on the market. Indeed, it may make up for the price with impressive performance and tech, however you may not feel like throwing well over $100,000 on your very first electric vehicle.

Rattling and other bodywork issues

Tesla’s simplistic design revolutionized the auto market just as much as did its electric powertrain. However, for years owners have been complaining about problems with body panel gaps, alignment, paint quality issues, premature rattles and so on.

In one instance, a Tesla Model S started rattling at merely 18,000 miles into its life and required multiple service center visits to remedy the annoying issue: a loose ball joint.

Electric vehicles are not very efficient in cold climates – that’s a fact. It is not just one issue leading to this, but rather a sum of elements. For instance, there is a lot of energy lost from the battery via heat and higher consumption of power in order to electrically heat the cabin,

Heat pumps tend to solve the heating issue on some electric cars, however, only the Tesla Model Y comes equipped with one, while the other cars in the lineup use Electric Resistance Heating System, considerably lowering range in cold conditions.

If urban commuting in a Tesla makes complete sense, it cannot be said the same about long tours, especially on the highway. Batteries are becoming more and more efficient, with some Tesla models going over 300 miles on a single charge, although you’d still have to plan your ride alongside the Supercharger network when going on a trip.

Of course, Tesla cars can also charge from regular public chargers, but with a big caveat: only roughly 25 to 35 miles of range will be charged over an hour, compared to roughly 150 miles of range in 25 minutes of supercharging. 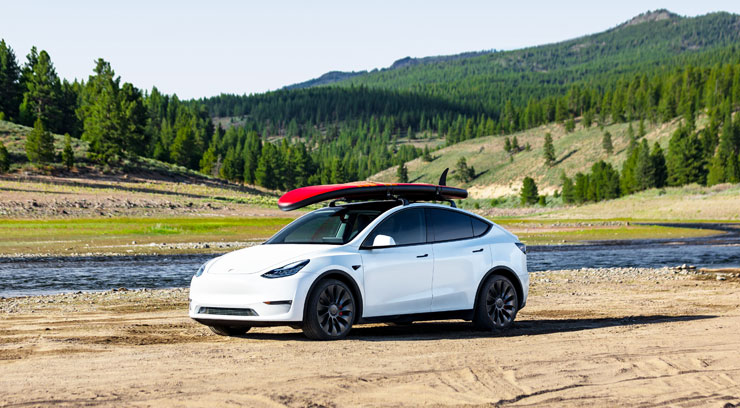 Unlike combustion vehicles, batteries of electric cars play a critical role in the functioning of the vehicle. Even though Tesla batteries are guaranteed to lose little capacity in the lifecycle of the car, if it’s ever the case to replace the battery pack, expect a hefty bill.

On average, a battery pack replacement on Tesla models can cost anywhere between $5,000 and $7,000. A substantial price to pay in order to ensure maximum range on your electric vehicle.

Yes, Tesla’s Autopilot can navigate on its own in various conditions, but as seen, it has the chance to malfunction at the very worst moment and potentially cause crashes and injuries. The concept of the Autopilot might prove to be exceptional a decade or so from now, maybe even allowing us to buy cars without a steering wheel. Still, for the moment, the hefty price Tesla is asking for the autopilot system feels unreasonable for a technology that’s still in beta phase.

It’s worth noting that many of the aforementioned downsides don’t necessarily apply just to a Tesla, and tend to be found on most electric vehicles currently on the market.

There are just as many strong points to owning an EV as there are downsides. Let’s go through the main advantages of owning a Tesla right now.

Move over Volvo, because Tesla absolutely shines when it comes to safety. Back in 2013, the Model S aced all of the tests from the National Highway Traffic Safety Administration (NHTA) and it was so strong and rigid that it actually broke the testing machine!  Since then, Tesla has continued to overdeliver when it came to safety tests, both in Europe and in US. For example, the Model X achieved the highest ever NHTA rating for rollover protection, seeming to almost magically stay on its wheels even when facing a considerable side impact.

Apart from the safe structure and rollover resistance, Tesla models pack plenty of safety features as part of the Autopilot technology. As such, Tesla cars feature the most advanced lane keeping, emergency braking, night vision and other sensing systems in the world. It’s not just keeping the driver safe, but also pedestrians and other vehicles.

While minimalistic in design, the interior of Tesla cars boast an astounding array of technology, all controlled from the big centrally mounted touchscreen. This screen controls many features, such as the infotainment, HVAC, and can even be used to stream Netflix or other streaming apps. The Sentry Mode uses external cameras to detect and record any external threats – a feature not currently found on any other car. 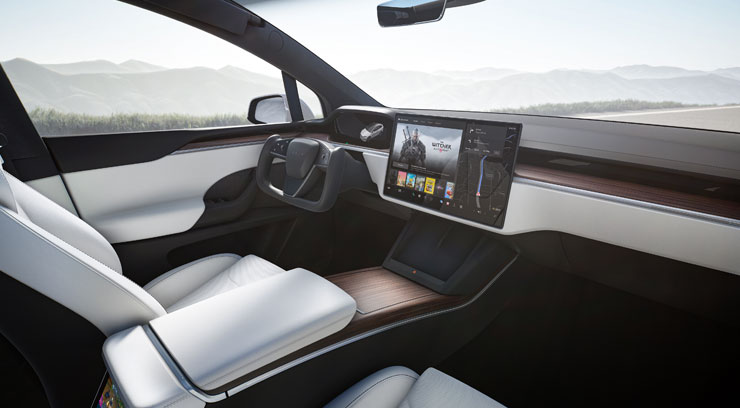 Constantly delivering the best performance and technology perks in the industry is no easy job for Tesla R&D department. To provide these features, Tesla uses cutting edge engineering, both on the hardware side (electric motors, onboard computers), as well as on the software side. Along with SpaceX, also founded by Elon Musk, Tesla hires the best AI and software engineers, creating a driven team that solves challenges of autonomous driving and electric drivetrains faster than anyone else.

Electric cars are fast, thanks to the instant torque of electric motors. Very few combustion cars can hold their ground against the sprint of EVs. However, none so far can come close to matching the Tesla Model S Plaid acceleration. With proper timing and the Drag Strip mode, the Model S Plaid has an estimated 0-60mph time of 1.99 seconds.

It also needs just 0.9 seconds to go from 30mph to 50moph, then another second and you’re already cruising at 70mph. Besides the gut-punching acceleration, Tesla advertises a 200mph top speed, way above what any other production EV is capable of, even above Tesla’s price range.

When the Covid pandemic hit, people where desperate to find ways to filter the air and keep themselves safe and away from the virus. Thanks to Tesla’s HVAC system, the air inside the vehicle gets filtered better than inside an airplane.

Using HEPA filters, Tesla cars, according to Elon Musk, can even withstand a biological attack for as long as there is power in the batteries, maintaining a fresh flow of oxygen in the cabin. Besides the apocalyptic bonus points, having a car that can properly filter outside air before reaching your lungs is a major plus for your health.

One of the main concerns for EVs when they started out was the lack of charging infrastructure, as well as the lengthy time needed to fill up the batteries. Once Tesla started developing, it also brought the Supercharger network to life, extending it across most US states and recently throughout Europe.

Thanks to the Supercharger Network, Tesla cars can charge faster and for cheaper, heavily diminishing range anxiety when going over long distances. At the current increasing rate of expansion, it is expected that in a few years, the Supercharger Network could offer charging capabilities all across the US and Europe, with charging times as little as 10 minutes for 300 miles. 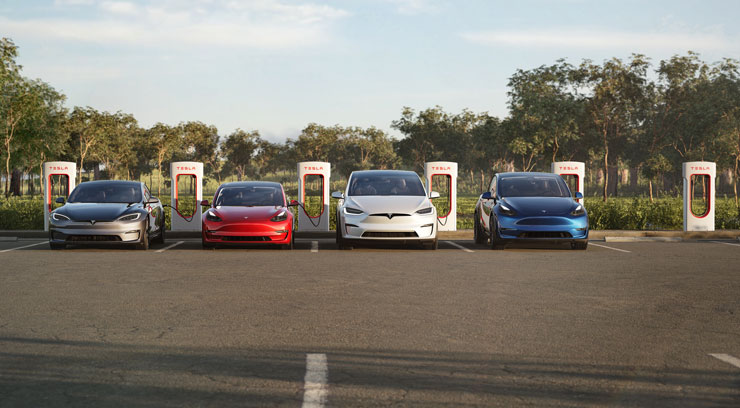 Currently, the most advanced autopilot systems on Tesla cars make use of 8 external cameras, 12 ultrasonic sensors and a potent onboard computer to process the data and work towards making Level 5 autonomous driving possible in the future.

The self-driving technology of Tesla is far ahead of any competitor. While it may still have its bugs that need fixing, the potential for development of the Autopilot system knows no boundaries.

Conclusion: Should you buy a Tesla?

The pioneer in the electric vehicle movement has plenty to offer. Supercar-like acceleration figures, superb safety, and an autonomous driving system to be rivaled by none are drawn back by high MSRPs and occasionally build quality issues.

Should you buy a Tesla? Well, it’s complicated. Acquiring a new car is a very personal decision that needs to take in account a multitude of factors and their weight. While a Tesla may not be the obvious choice for everyone, it does meet the criteria for plenty of potential buyers out there on the market.

This Saab 900 Was Built to Last

Supercar vs Motorcycle vs ...