They say you should never meet your heroes.

I’m not sure who “they” are or when they “said” this, but the point of the old saying is that your expectations often outweigh reality, and meeting a person/goal/car can be disappointing compared to the dream of it. When the A80 Supra (commonly called a fancy MKIV in the States, or less fancy fourth generation) debuted and blew the doors off everything in its price range, it became a ‘90s hero car. The Fast & the Furious is great entertainment even if it’s a terrible movie, and it launched the MKIV on a trajectory similar to the movie’s other stars, Vin Diesel and Paul Walker. Not all heroes wear capes, but an A80 could pull it off, probably during a ludicrous high speed highway run.

While the A80’s 3.0L inline six drivetrain is unbelievably stout (a local car dyno’d a thousand horsepower at the wheels on the stock bottom end), it was the late Gen X and early Millennials that finally started earning money and shot the price of Supras up at auction like they’re Boomers buying Hemi ‘Cudas. But, that’s where the griping started. With solid factory performance, somewhat rarity, insane mod-ability, and starring roles in influential car movies, it didn’t matter how good a next gen Supra would be. When it was rumored and teased for over a decade, fanboys would find something to gripe about in an A90. When Toyota finally revealed the new Supra in 2019, find some gripes they did. You’ve probably heard a couple of gripes already.

The main point of contention is what’s under the hood. There’s another 3.0L inline six cylinder in there. Purists could live with that, even if it is only sporting one turbo now instead of two. What gets people up in arms is that the chassis, and especially the B58B30M1 engine, are both sourced from BMW, specifically the Z4. Connoisseurs know the German company has a reputation for inline sixes, and that explains the engine’s smoothness, but for the argumentative types in the comments section it’s the stats that matter. Toyota says the engine is good for 335 horsepower and 365 lb-ft at the crank. That’s not impressive today, only 15 more hp than the model 20 years prior, but the A90 Supra is also noticeably lighter, coming in around 3,100 lbs. Performance is dramatically improved too. Car & Driver ripped to 60 in just 3.8 seconds, and ran a 12.3 second quarter mile at 113 MPH. That’s faster than the numbers suggest, putting it within range of the Corvette and Cayman GTS, and a good 1.5 seconds faster to 60 than the A80 Supra. C&D thought that was weird, so they strapped it to a dyno and put down 339 hp and a crazy 427 lb-ft. That’s way more at the ratings at the crank, so either Toyota is messing with reviewers by giving them specially tuned press cars, or the regular Supra is way under-rated.

Another objection is the lack of manual transmission, since the underlying BMW Z4 doesn’t have one, the Toyota version doesn’t get one either. The sole transmission at launch is the ZF 8HP 8-speed auto. It’s a fast piece, and interestingly can shift non-sequentially (ex: jumping from 8th down to 3rd when needed), but you still don’t get to shift it yourself. Plus enthusiasts say it’s the weak point of the drivetrain. BMW tuners are easily pulling better numbers out of the B58, but the ZF 8HP is almost working at its max torque rating in the Supra. It is efficient however, allowing the Supra to achieve its superior 31 MPG rating over competitive sports cars in this class. Maybe it is a Toyota after all. 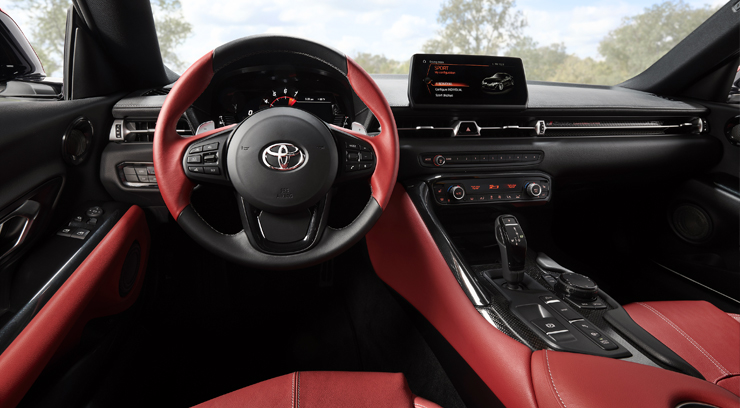 Less complaints criticize the looks. If you squint, it does kinda look like an evolved version of a Supra. Toyota design has been, ah… questionable lately. Instead of boring, the Camry, Corolla, and even Prius received angry, edgy lines that don’t really make sense on the car. Supra is mostly spared there, with front intake scoops in the grille that look functional, and a character line that flows into wide rear fender flares. Those suggest the car can accept some massively deep dish TE37 wheels once it gets home. A few whiners say it looks too compact, and it is similar in size to a Toyota 86, but the Supra’s wheelbase is smaller while the body is a few inches longer and wider. This makes since, as it only seats two. Inside, those two will find the layout and material quality obviously targeting low end Porsche. It’s a solid design, and looks upscale, modern, and sporty. The gauge cluster is particularly cool, a single display screen with configurable gauges. That’s becoming the standard now, but it’s nice to see in a not-uber-high-end sports car.

Receiving absolutely no complaints (so far) is the suspension. It’s actually pretty standard stuff by modern sports cars. MacPherson struts up front and multilink rear suspension, aluminum control arms in front, and an odd mix of aluminum and steel out back. There’s thick roll bars and coil springs, which will be ripped out for TRD parts as soon as the owner can find them online. While Toyota is expecting this Supra to be a tuner car, there’s nothing wrong with the stock setup. It handles very well, but also soaks up bumps in crappy pavement. If the Normal suspension setting isn’t to your liking, you can select Sport or Sport+ for a more firm shock damping. Those modes also improve stability and throttle, exhaust note, transmission shift points, and the steering heft. I’m not a huge fan of electronic driving nanny features, but that one’s pretty badass.

So what’s all this cost? The new Supra has a base MSRP of just under $51,000 after destination charges, which sounds like a lot of money. It is, at almost exactly twice the price of a base 86, but in some ways the Supra is twice the car. Premium trim will cost you a $4,000 premium, and Launch Edition runs a bit over $56,000. The danger to Toyota here is not from other Toyota cars, but from the VERY established competitors. Low $50k used to be recognized as Corvette money, but the C7 sold well and GM slowly ratcheted up the price each year to where a 2019 started at $56,000. The C8 is a revolutionary new design for Corvette, but is expected to cost similar money. For a little more than Supra money, you can buy a ton more badge recognition from non-car people, as the 718 Cayman starts at $56,900 and looks unmistakably Porsche. And if you want a convertible Supra, you’re out of luck. That means you’d have to buy the $50,000 BMW Z4. Tough crowd.

All in all, ignore the name and this is a great sports car. Fun to drive, great acceleration, a solid interior and good craftsmanship, a fun car for the track or an enjoyable drive home. The Supra name twists some people’s undies here, but that should fade once we start seeing modified versions on YouTube. This may not be a hero car equivalent to Spiderman, but hey, Peter Parker is pretty cool too.

Monterey Car Week on the Lawns

How to Fight Ethanol Corrosion

This Saab 900 Was Built to Last