Back during the 60s, Jaguar made one of the most beautiful cars in the world. And it’s not that we’re saying so, but Enzo Ferrari himself uttered this historic statement. When one of the most successful car makers in the world proposes another brand’s model as a beauty standard, you don’t question the decision.

If back in the day an English car was the most beautiful one out there, is there a chance that the new Aston Martin DBS Superleggera is the new standard in sexy? Do we have another English car stealing the podium? Let’s find out together.

When it comes to astonishing, limited run supercars, it may come off as weird to discuss a market segment. However, even though it’s small and very niche, there are still a group of people who are looking for a front-placed engine with many cylinders and even higher displacement. Oh, and it needs to be a grand tourer taken to the extreme. A super grand tourer if you wish.

More seasoned car fans will frown a bit on the above statement. Big, powerful engine and grand tourer spec? That’s literally the definition of the Ferrari 812 Superfast! Well, technically you’re not wrong. However, the 812 Superfast, while a beast on its own, is another type of GT car. It’s more focused on raw performance. It’s noisier, more ridged and less focused on comfort than the DBS.

Therefore, with a spot open on the market, Aston Martin takes a shot at it. So far, on the surface, the DBS Superleggera checks all of the usual items we would come to expect from a grand tourer of this caliber. Let’s have a look at the details to see if the British aspiring super-GT is worthy of the title. 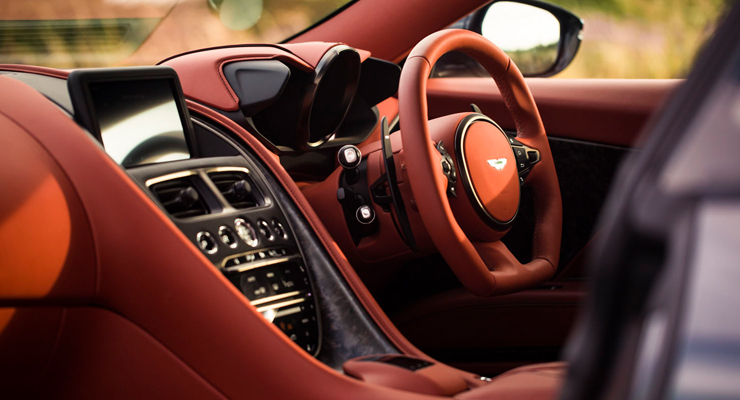 The Aston Martin DBS Superleggera brings on a wider stance coupled with an even more imposing road presence. The bodywork’s aerodynamic-friendly shapes, end with the large rear diffuser. Thanks to these elements, the DBS Superleggera boasts just shy of 400lbs of downforce at 211mph.
Unlike the aluminum construction featured on the previous Aston Martin, the DB11, the British automaker used a carbon fiber clad monocoque to achieve a lower weight, higher torsional rigidity and better overall performance.

On the inside, the DBS Superleggera shares a plenty with the DB11. And by a lot we mean that Aston Martin took the DB11 blueprint and laid it inside the carbon fiber structure of the DBS. Purists may accuse Aston Martin of a lack of originality here, but the DB11 interior is nothing to complain about and fits particularly well with the super tourer spec. Driving position is near perfect and everything is adjusted electronically to match touring grade spec.

Visibility is slightly hampered by the notably thick a-pillars – a compromise required when switching to carbon fiber. On the same note, only a small rear window sheds light over the trunk. And due to the restricted visibility it might seem trickier to negotiate a tight corner or back into a spot, a 360-degree camera and family of parking sensors will compensate for some of these concerns.

In terms of finishing touches, there is a bold push with fine, hand-stitched leather that contrast against the carbon fiber trims. The infotainment system is sourced from Mercedes, just as it was on the DB11. When used heavily, the rotary button-controlled screen will eventually get laggy but it’s an upgrade to anything else Aston Martin ever implemented in-house. Also, the rotary button control brings less of a distraction when compared to Ferrari’s touchscreen display.

Front seats offer plenty of room, even for taller drivers and passengers. On the other hand, you’d be lucky to have teenagers sit in the back seats for more than a few minutes before complaining of the lack of space. Truth be told, the rear seats are better suited to carry a set of golf clubs or a pair of Birkin Bags rather than passengers, especially since the DBS Superleggera trunk space is quite restricted.

Aston Martin matched the DBS Superleggera’s sensational looks with an equally sensational power unit that seems to continuously challenge you to push it harder and faster. Strip away the carbon fiber shell to uncover a proper engine. The DB11 featured 5.2-liter V12 has been electronically tampered to boost power into the realms of 715bhp and 664 lb-ft. of torque.

In order to get all that power and torque to the wheels, the British automaker introduced a new gearbox into the mix. ZF’s 8-speed transmission powers the rear wheels by means of a carbon fiber shaft. In order to ensure a decent lifespan for the components, the first two gear ratios are limited to reduce wear incurred from the vast amount of torque available from merely 1,800rpm.

A mechanical limited slip differential is integrated into the rear axle, with more bias than the DB11, pushing the power to the ground via bespoke Pirelli P Zero 305/30 tires.

Even though, at 3,966 lbs, the DBS Superleggera is 154 lbs lighter than the DB11, it brings a wider track both on the front (1 centimeter) and rear (2 centimeters). This translates to better stability around corners and reduced oversteer. Looking at weight figures, one may wonder how much truth there is behind the “Superleggera” branding. After all, at almost 2 tons (depending on lightweight options and amount of fuel in the tank), the DBS is not exactly lightweight. Some purists may wish for an even more performance-focused variant that strips away many of the heavy luxury accoutrements in favor of achieving an even greater power-to-weight. 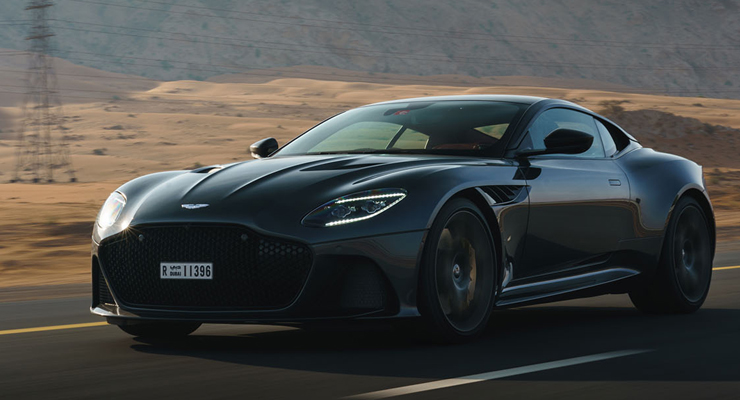 With accessible and pretty much overkill performance figures mixed with a cozy, comfortable interior, the Aston Martin DBS Superleggera is a proper super-GT. From its low driving position, the DBS Superleggera hides its extremities from the driver’s point of view. You often forget how large this car is. While not quite as nimble as its Vantage baby brother, the DBS still carves out narrow twisty roads with relative ease.

The V12 engine pulls its weight right from the lower RPM ranges and keeps up the pace through the mid-range while only slightly dropping in performance near the redline. Its readiness translates to hilariously easy overtakes on the highway. Subtle pressure on the go pedal and the cars in front of you, are now magically behind you in a blink.

At maximum speed, the aerodynamic profile generates just shy of 400 lbs of downforce with two thirds pushing on the rear end. Not taking into account any other engineering gimmicks, this is the biggest statement of stability the DBS has to offer.

Sixty happens in the mid 3 second range, and keeping the throttle to the floor will top out the speedometer at 211 mph. You will have to find your way through the lower ratios and onto fourth and fifth gears. At this point, you can use the massive torque reserves from the V12 to basically slingshot you out of a corner and on the straights for full acceleration.

With polished responses on the throttle and brake, the DBS smoothly finds its way through the 8 gears. The double-wishbone and rear multi-link suspension setup is authoritative, featuring a 5mm lower ground clearance compared to the DB11. Cornering is sharper thanks to more aggressive camber angles and more rigid bushings. Fine tuning of suspension and body behavior is achieved via the GT, Sport and Sport Plus modes available.

The 21-inch wheels might bring up some noise and shivers that permeate the cabin on rougher roads, but softening the suspension with Comfort mode will take care of that. However, drivers may notice more road imperfections when running the DBS in the more aggressive Sport Mode. The weighted electric steering is as quick as it gets, adding up to a clean and satisfying behavior on the road and appreciated whether going for a leisurely cruise or pushing the Superleggera to its limits on the track.

More muscular, better equipped and more stylish than previous Aston Martin products, even with its stratospheric price tag, the DBS Superleggera offers an intriguing value proposition for those fortunate enough to consider it. Overall, it’s a cracking super-GT that brings to the table a tireless, well rounded V12 paired to a rigid and finely tuned carbon fiber chassis, all while boasting a carefully clad interior and ready to accommodate even the most discriminating enthusiast.

The Aston Martin DBS Superleggera is not only the best looking super-GT, but arguably the sexiest car on the market today.

Monterey Car Week on the Lawns