There might be a strong push for SUVs globally, with buyers looking for bigger luggage space, elevated driving position and plenty of legroom. However, for those whom are willing to stick to the classics and not take one and a half parking spaces every time they go to Walmart, a midsize sedan is the right choice.

The 2022 KIA K5 aims to top the midsize sedan rankings by pushing for a sleek look, agility and a healthy dose of power mixed with considerable safety standards.

Formerly known as KIA Optima, the new KIA K5 doesn’t bring just a new name for 2022, but also a new palette of engine configurations to choose from. Given the fierce competition K5 is facing from the likes of Toyota Camry, Honda Accord and Hyundai’s Sonata, KIA had to come up with some impressive features to push up through the rankings.

The Korean automaker is pushing for a more engaging future. The K5 comes equipped in 5 trims: LX, LXS, GT-Line, EX and GT. Obviously, the star of the show is the 290hp GT trim, packing quite a punch. Oddly enough however, it lacks the AWD system available on lower trims.

Most of the sedans will be available with the 4-cylinder 1.6-liter, turbocharged 180hp engine. There is a front wheel drive option as well as an all-wheel drive configuration. The AWD is paired to an 8-speed automatic. Depending on where you plan on using the car, it might be worth shedding the extra weight of the all-wheel drive if your roads aren’t covered with ice all too often.

On the other hand, the 2.5-liter turbocharged 4-cylinder engine found on the GT trim makes very good use of its 290 hp. The 0-60mph time is better than 5 and a half seconds, in part thanks to the 311 lb-ft of torque sent through the dual clutch 8 speed automatic to the front wheels.

Even with the lack of a grippy AWD system on the GT trim, the 2022 KIA K5 can still easily claim the sport sedan badge.

The exterior drops a bomb 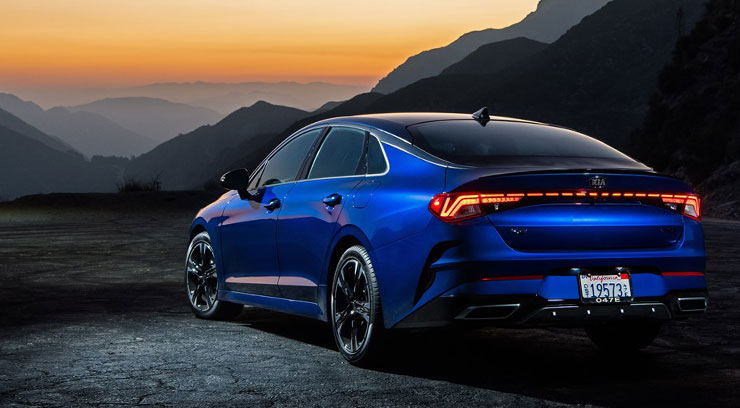 All around the world, sedans are dying, with some automakers considering removing them from the lineup in years to come. In an attempt to win back sedan buyers and boost sales, KIA went with a bold and aggressive design. The Optima was always a fairly good-looking car. However, the K5 took it two levels up. With the elongated rear, sharp side lines and headlights aggressively bent into the fenders and bumper, the K5 catches your glance and maintains it. Just above the grille, the zig-zagged turn lights are a real turn-on. The shape looks like something you would normally see only on the concept model at auto shows, yet somehow slipped through all the corporate red tape and into production.

The grille wraps around the entire front end of the car. The design goes along with the patterned sharp edges and aggressive angles, yet it may come around as too big for some tastes.

Plenty space for passengers and luggage

The total length of the 2022 KIA K5 is 193.1 inches. It rides on a 112.2-inch wheelbase, which puts it in the middle of the mid-size category. The K5 can accommodate 5 passengers and their luggage without too much fuss.

For the front seats, there is power adjustment even on the lower trims, while the upper end brings along synthetic leather, seat heating and cooling. For some, the outline of the cooling system in the seat might make it slightly less comfortable for very long rides. It will be however appreciated for those living in warmer states, where summer days turn metals dangerous to touch.

With 35.2 inches of legroom, even 6-footers can relax in the back row and enjoy the panoramic sunroof. Kids will probably feel like they are handed an entire playground in the back of the K5.

There is a considerable amount of fingerprint-friendly glossy plastic on the lower trims, but the GT-Line features more hard plastic than the GT and EX for example.

You can have a split-folding rear seat on the LXS model, while the leather and cloth upholstery come with the more expensive GT-Line trim. On the same note, the GT-Line provides 18-inch wheels, a brand-new navigation system, 10-way power seats with options for a panoramic roof, adaptive cruise control, a 10.3-inch touchscreen or the $1,800 AWD system.

Want a fully-featured KIA K5? Currently it will set you back roughly $32,000 (or 0.56 Bitcoin as of this writing – if you prefer) and will come charging with the 290-hp turbo-4, a sports suspension, larger 19-inch wheels and sport seats. 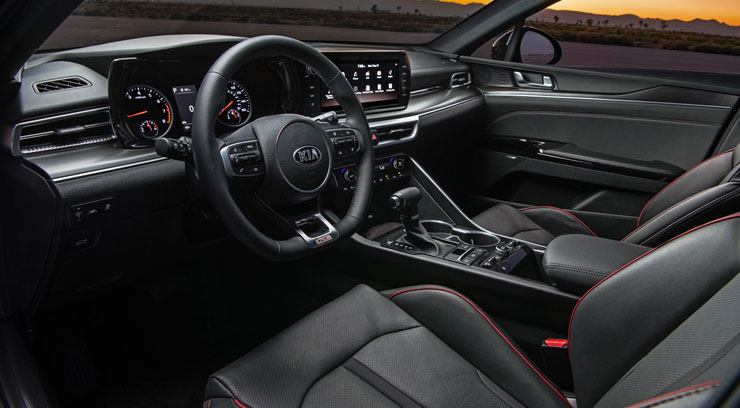 First off, the GT trim, with its 290hp and 311 lb-ft of torque casts shadow over Honda’s 2-liter turbo Accord and Toyota’s V6 Camry. It has more power than the first one and drops more torque than the latter.

The engine makes the K5 more fun to drive than you might think. The sport suspension doesn’t give in to body roll and keeps the car stuck to the asphalt when driven to the limit. One downside to the well behaving sport suspension is the more coarse and stiff riding on the street.

The 8-speed dual clutch on the GT trim provides even faster and crisper shifts. Coupled with the Sport+ mode, it gets surprisingly fun to drive for a reasonably priced mid-sized sedan. In Sport+, suspension stiffens up even more, steering gets heavier and allows the car to boldly attack sharper corners. While generally the on-the-limit driving experiences are better in a hot hatch, the K5 keeps you on your toes, despite its size.

The K5 maintains the tradition of other KIA and Hyundai powertrains. The transmission is efficient, gear shifting is smooth and doesn’t take any time to respond when you push the throttle pedal to the floor.

In a market where many automakers have given up on the sedan, the K5 comes as a long-awaited ray of sun, mixing style and performance into great bang for buck package. The interior features plenty of space both on the front and rear seats and there is enough luggage capacity for all family members.

The all-turbo lineup provides plenty of power without sacrificing too much fuel economy. While we would have wanted to see an AWD option available with the more powerful 290hp engine, the GT trim still manages to please the occasional adrenaline rush.

With all that in mind, there is plenty of evidence to sustain that, even in the very disputed mid-sized segment, KIA manages to rise its head above competition from Toyota and Honda by good engineering and cleverly integrated ideas.